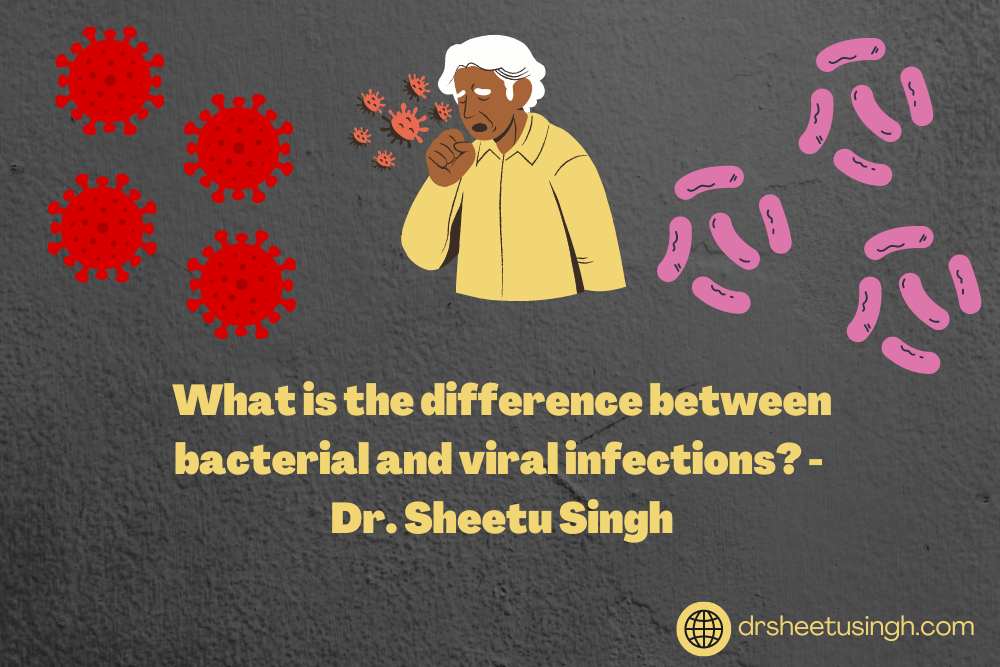 Pathogens are those little organisms that can not be seen by the naked eye. These micro-organisms find their way into the human body, establishing themselves, resulting in one or the other disease. These organisms multiply inside the human body, derive nutrition from it, take shelter and in return cause pathogenicity. Although not all bacteria are pathogenic, some are useful too. They prevent other bacteria or organisms from settling inside the same body. Let’s find what is the difference between bacterial and viral infections.

Difference between bacterial and viral infections?

Bacteria are unicellular microorganisms, that can survive with or without the host. Mostly, they aren’t harmful, in fact inside our bodies, they are regulating vicious functions too. The disease-causing bacteria however, when colonising inside the host organism, multiply rapidly inside and make enormous copies of themselves which causes the release of various types of toxins in greater amounts leading to cell death, hence the appearance of symptoms caused by those bacteria.

How are bacteria different from viruses?

Viruses are comparatively much smaller in size and they can only multiply inside the host, unlike bacteria which can also reproduce outside the host organism. Also, they aren’t cells, they are just genetic material coated inside the protein layer. They enter the healthy cells, produce copies of their genetic material and kill the cells finally to infect neighbouring cells too.

Although, it is difficult to differentiate between a viral and a bacterial disease without pathological help as the mode of transmission and infection are quite similar, symptomatically, your health expert can conclude whether it is a bacterial or a viral infection. Medication usually starts after the confirmation of the disease.

These infections occur when the pathogenic bacteria gain entry into a human body and multiply producing copies of themselves in large numbers that our immune system fails to work against them. This leads to the establishment of bacteria hence the disease.

After colonising the cells of the host, the toxins produced by the bacteria start showing their effect on the target organ. The rate of reproduction of bacteria is quite high, sadly, our immune system can not take such huge numbers.

The incubation period of the bacteria inside the body of the host varies and the appearance of symptoms, therefore, differs with the disease.

Key symptoms that indicate the bacterial infection include:

– Increase in fever as the disease progresses.

Examples of bacterial diseases include Skin infections, STDs such as Gonorrhoea, Chlamydia, Syphilis, and respiratory infections such as Pneumonia, TB etc.

Viral infections occur when disease-causing viruses enter the human body and produce large copies, masking themselves inside the human cells and devastating their immune systems. The viral genetic material takes over the host machinery and uses its enzymes to produce its copies which means it requires the host for a hostile environment to reproduce following which it spreads throughout and produces disease.

Key symptoms of viral infections include:

– Immediate symptoms within a few days.

– Fever occurs but is not as dangerous as bacterial infections.

Examples of viral diseases include skin infections like poxes, respiratory infections such as influenza, the common cold, Corona, and STDs like HIV & Herpes etc.