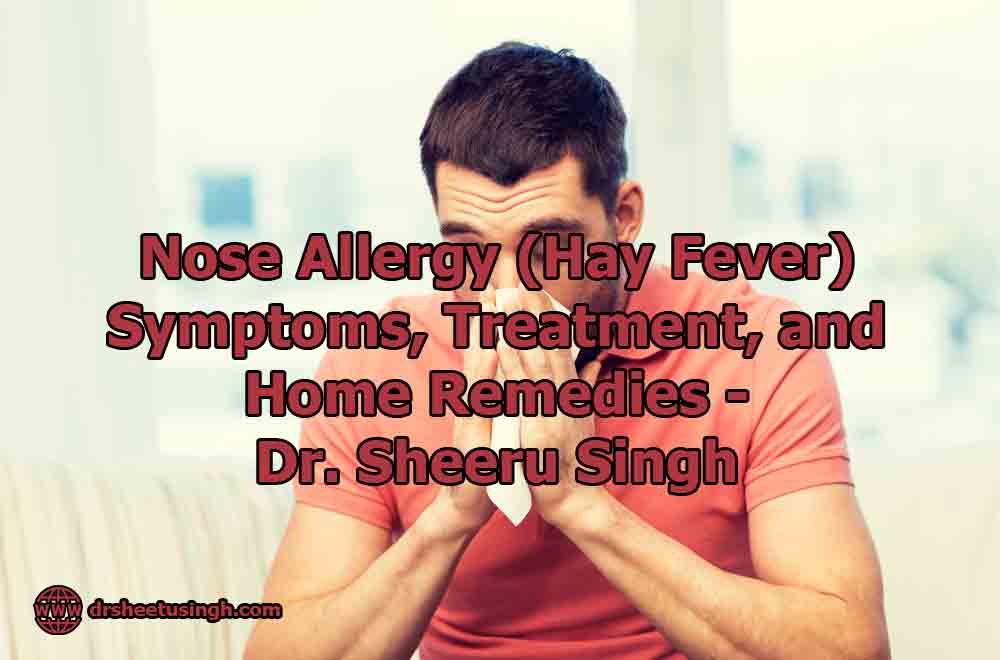 As a result of allergens in the air, allergic rhinitis (hay fever) occurs. Histamine is a natural chemical release by the body as a reaction to breathing in allergens through the nose or mouth. Allergens both indoors and outdoors can cause hay fever. Mold, dander from pets, dust mites, and plant pollen are common causes.

Hay fever (allergic rhinitis): what is it?

In addition to sneezing and nasal congestion, hay fever can cause irritation of the nose, throat, mouth, and eyes. A common cold is not allergic rhinitis, which is also known as infectious rhinitis. There is no contagious nature to hay fever.

What is the usual onset of hay fever?

There is no season when you cannot get hay fever. As trees and weeds bloom and pollen counts rise in spring, summer, and early fall, seasonal allergies are more likely to occur. Allergies can occur throughout the year due to perennial causes. Cockroaches, dust mites, pet dander, and pet hair are the irritants that cause them.

What is the prevalence of allergic rhinitis (hay fever)?

There is a high incidence of hay fever. A large percentage of the U.S. population suffers from allergic rhinitis. Millions of people suffer hay fever yearly, both children and adults.

Allergy rhinitis can affect who?

Families pass down allergies (inherited). An allergic parent or a family member increases your chances of getting hay fever. Hay fever is more common among people with asthma or eczema.

Hay fever (allergic rhinitis) is caused by what?

It is cause by your body’s immune system reacting to airborne irritants. You can inhale the irritants (allergens) through your nose or mouth because they are so small. Most people are not allergic to allergens. However, your immune system believes the allergen is invading if you have hay fever. By releasing natural chemicals into the bloodstream, your immune system protects your body. Histamine is the main chemical. As these mucous membranes attempt to eject the allergen, they become inflamed and itchy.

Allergic reactions may result from several allergens, including:

Inflammation of the nose and throat can also be cause by food allergies. In case of an allergic reaction, seek medical attention immediately. It is possible to die from food allergies.

Nose allergy symptoms of hay fever can appear at any time of the year. Spring, summer, and early fall are the worst times for outdoor allergies. Flowers and weeds bloom in warm weather, causing a higher pollen count. People spend more time indoors in the winter, which can aggravate allergies caused by pet dander and dust mites.

What is the diagnosis of hay fever?

During your doctor’s visit for nose alllergy, he or she will examine you, ask about your symptoms, and assess whether you have asthma or a cold. A blood sample may be taken and sent to a lab to test your antibodies to specific allergens. Immunoglobulin E (IgE) blood tests are use for this purpose. Allergies, including food allergies, can be detect with this device.

A skin prick test may be recommende by your provider to determine what allergens are causing your symptoms.

How does a skin prick test work?

There is no pain involve in this test, though it may sometimes be a little uncomfortable. Your provider scratches or pricks your skin with different allergen samples (usually on your forearm or back) with a needle. When the skin is scratch, allergens can penetrate beneath the surface. If you are allergic to the allergen in 15 to 30 minutes, the area becomes red, itchy, and irritated. Allergic reactions can cause raised, hive-like blisters called wheals. An allergy skin prick test can identify the allergens causing your symptoms in a safe, effective manner.

Nose allergy (Hay fever) can be control with several allergy medications. Injections, eye drops, nasal sprays, and eye drops are some of the many forms of these treatments. Pregnant women and those with other health concerns should consult their provider before taking any medication. Providers may suggest:

An antihistamine can be purchased over the counter or with a prescription. In an allergic reaction, your body releases histamine, which they block. Inhalers, eye drops, nasal sprays, and pills are all forms of antihistamines. The following are among them:

What are the treatment options for allergic rhinitis (hay fever)?

A decongestant relieves nasal and sinus congestion. Decongestants can be taken orally (as pills or liquids) or inhaled (as nasal sprays). Among them are:

It is possible that your provider will recommend that you take immunotherapy pills under the tongue.

Hay fever: is it preventable?

Hay fever cannot be prevented, but lifestyle changes can help you cope with it. Avoiding irritants as much as possible can relieve Nose Allergy or hay fever symptoms. Symptoms can be reduced by:

Although hay fever can be uncomfortable, it poses no serious health risks. Over-the-counter medications and lifestyle changes are usually enough to manage hay fever symptoms. The risk of ear infections and sinus infections is higher for people with airborne allergies.

Hay fever: when should I consult my healthcare provider?

Asthma and other conditions such as nose allergy can cause hay fever, so your doctor should rule them out. Get medical care if you have difficulty sleeping or living an everyday life due to hay fever symptoms. To help you feel better, your provider will be able to identify the allergens causing your reaction and recommend treatments.

Nose Allergy or Hay fever sharing can impact your quality of life and keep you from doing the things you love. Medications and lifestyle changes have proven to be effective ways to manage hay fever for millions of adults and children. If you are experiencing symptoms, breathing is complex, or you feel unwell, talk to your healthcare provider about how you can alleviate them.