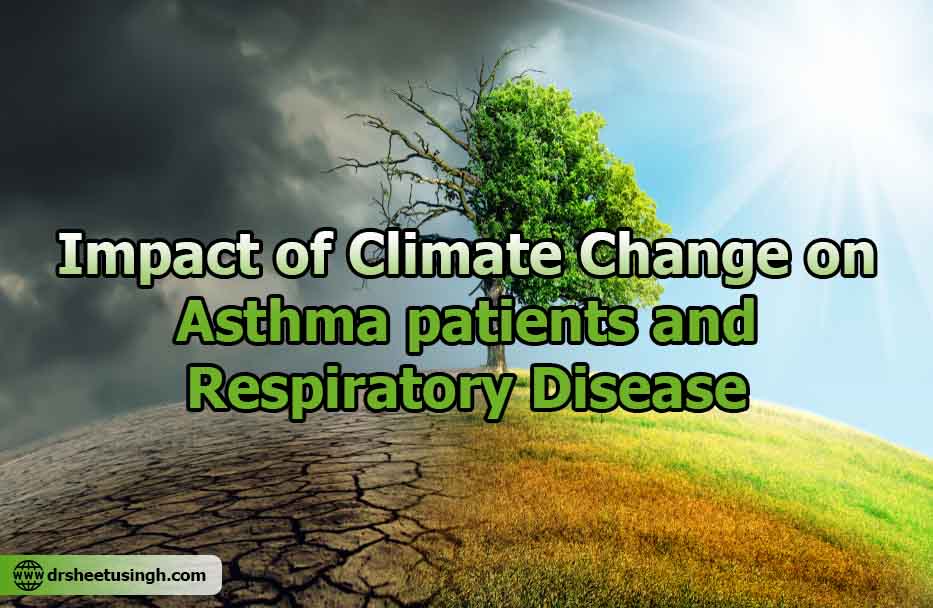 Industrialization has led to many developmental changes around us, but it has induced major environmental changes in our surroundings too. Such massive change in Earth’s environment has triggered many diseases. Impact of climate change on asthma patients one such class of diseases is a respiratory disease. The rapid increase in pollution in the last century has tremendously escalated lung disorders. Lungs are the site of exchange of gases, wherein fresh oxygen from the environment is delivered into the body and carbon dioxide is collected and exhaled out of the body. Due to an increase in the pollutants in the surroundings, not only oxygen but other poisonous gases and chemicals, when gain entry into the respiratory tract, can cause disease.

Impact of Climate Change on Asthma patients and Respiratory Disease

The relationship between environmental factors and asthma isn’t new. Various anthropogenic factors have contributed to a manifold increase in the cases of Asthma over the last few decades. An increase in air pollutants and allergens in the atmosphere is contemporaneously leading to asthma prevalence lately. Several factors might contribute to asthma exacerbations, that include pollen allergies, global warming, increased vehicle emissions, and air pollution. Climate change can increase many types of breathing problems.

The release of pollen grains into the air is a necessary event for wind-pollinated flowers, and seasonal allergies were considered moderately regulated. But global warming has increased carbon dioxide levels significantly which in turn has also risen Earth’s average temperature. This change has disrupted the occurrence and duration of pollen season. In response to high temperature and high CO2 levels, plants photosynthesize more and produce more pollens. These pollens remain in the air for quite some time. Pollen when gaining entry into the respiratory tract of humans, act as allergens. Some people are more sensitive than others, and thus start producing allergic symptoms. Prolonged pollen allergy and hypersensitivity can also induce diseases like asthma due to airway inflammation.

Asthma once occurs, has a variety of triggers, dust being one of them. Dust particles can cause inflammation in the airway. This is accompanied by excessive secretion of mucus which then creates difficulty in breathing. Smaller dust particles can irritate the lungs and can worsen breathing difficulties. Also, dust can’t just be an asthma trigger, it can cause asthma in young children too. Prolonged exposure to smaller dust particles can cause this disease in children at a very tender age. This asthma causing and trigger factor can simply be avoided by taking precautions if taken care of.

Particulate matter also goes by the name “particle pollution” is a mixture of extremely small particles with tiny droplets, which include chemicals, dust or soil particles, acids, etc. The particulate matter might vary in size, the smallest particles can reach up to the alveoli, directly affecting the exchange of gases inside the lungs. This environmental factor has the utmost impact on respiratory health. These substances aggravate respiratory issues, such as asthma, by blocking the airways of the respiratory tract due to increased debris and mucus. These substances are increased in the environment due to natural or anthropogenic causes. Urbanization and industrialization affect the concentration of such substances in the surroundings.

As the environmental conditions are constantly deteriorating, it is mandatory to know the triggers of your asthma conditions and impact of climate change on asthma patients. There is no precise test for the diagnosis of asthma. It is symptomatically diagnosed and is treated based on the symptoms stated. A complete cure for asthma is however not available. Prevention is the best help for asthma patients. Also, the above-mentioned causes and trigger points can be checked. Short-term relief can be provided with the help of inhalers and nebulizers. Keeping an Asthma action plan handy is a must too. If your asthma symptoms uncontrolable and trigger often in most of the day then visit top pulmonologist in Jaipur Dr. Sheetu Singh.