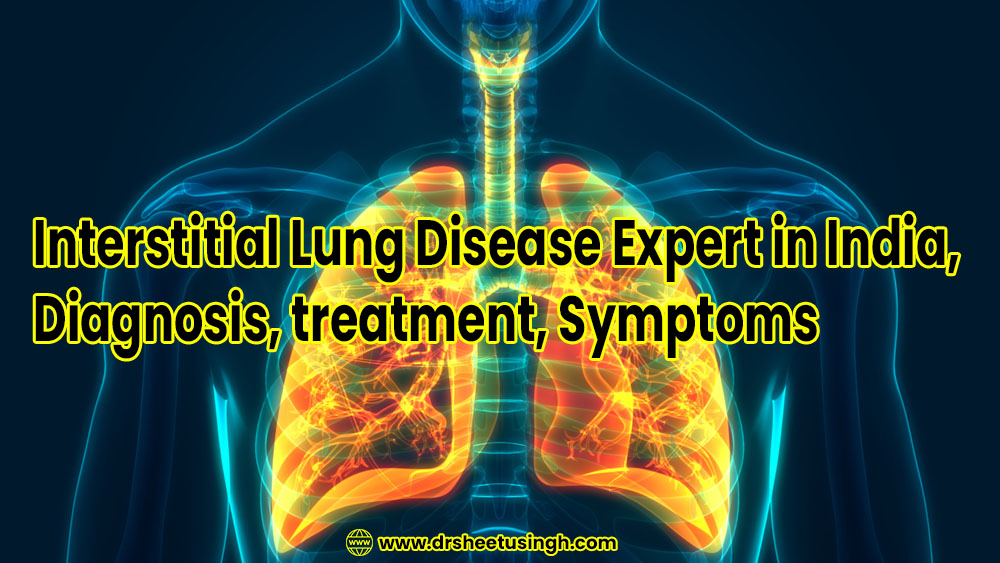 Interstitial Lung Disease Expert in India – There are many important organs in the human body, but one of them is the lungs, without water and food, we can survive for a few days or a few hours, but without breathing we can live only a few minutes. Due to any disease of the lungs, there is a lack of oxygen in the bloodstream, which also harms other organs, so we need to take care of our lungs. There is one disease that can harm your lungs too much. Interstitial lung disease (ILD) is an umbrella term used for a huge group of diseases that cause progressive scarring (fibrosis) in the lungs. The scarring causes inflexibility in the lungs which makes it tough to breathe and obtain oxygen to the bloodstream. Lung damage from ILDs is usually irreversible and gets severer over time.

Interstitial lung diseases are often caused by long-term exposure to hazardous elements, such as asbestos, hypersensitivity pneumonitis. Some sorts of autoimmune diseases, like rheumatoid arthritis, can also cause interstitial lung disease. In some cases, however, the causes remain unknown. Smoking can not only cause ILDs but can make the situation much more critical. ILDs from various causes and conditions have different treatments and possibilities. ILD is more common in adults, but can rarely happen in children.

Interstitial lung disease seems to occur when an injury to your lungs triggers an abnormal healing response. Ordinarily, your body generates just the proper amount of tissue to repair the damage. But in interstitial lung disease, the repair process goes awry and the tissue around the air sacs (alveoli) becomes scarred and thickened. This makes it harder for oxygen to pass into your bloodstream.

Some of the following tests may be required:-

How is ILD treated

Treatment for ILD is meant to preserve the lung’s ability to function and keep the disease from getting worse. Treatment depends on many factors, including the sort of ILD and how severe it is.

Oxygen therapy – Extra oxygen delivered by a tube in the nose can make breathing more easier. This therapy increases the blood’s oxygen levels, in order that every breath is more productive.

If someone has this disease, then it is necessary to stop it quickly because it is irreversible. But its damage can be minimized. If you searching Interstitial Lung Disease Expert in India then visit once Dr. Sheetu Singh, Asthma and Chest Specialist. More details at – www.drsheetusingh.com